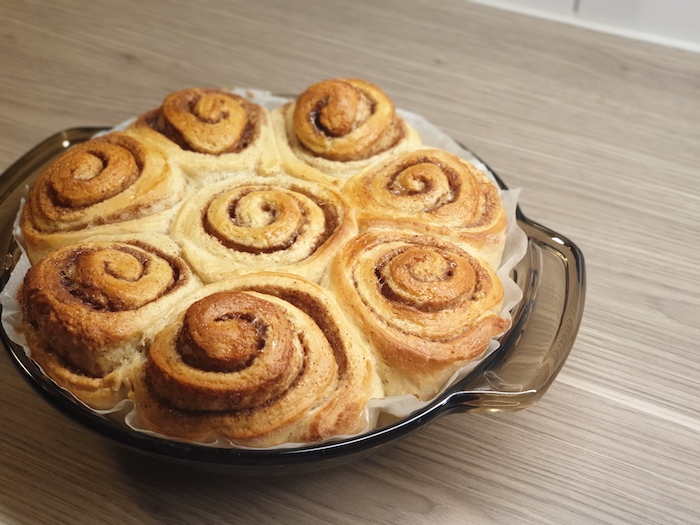 I remember the first time I tried a cinnamon roll. I was 10 years old and we were visiting family friends in Kansas. Our now late friend Evelyn made the best ones in the world and boy they tasted good! She would bake a batch just for me each time we visited and when I eat one now, it brings back those good memories. Of course, she passed me down the recipe but even though I had watched her make them over and over again, I never succeeded. After countless failed attempts, baking cinnamon rolls became one of my biggest pet peeves in the kitchen but that was until today! This vegan take on classic cinnamon rolls exceeded my expectations and the recipe is as simple as it can get.

Instructions:
1) Mix plant milk, sugar, salt, cardamom and yeast.
2) Add flour progressively until the dough is cohesive and not too sticky.
3) Next, add the margarine cubes one by one and knead until the dough is smooth. Add more flour if the dough sticks.
4) Place in bowl and let rise for an hour at room temperature.
5) Preheat oven at 180°C. Meanwhile, drizzle some flour on a clean surface and work the dough into a 1cm thick rectangle.
6) Spread softened margarine all over and sprinkle with sugar-cinnamon mix.
7) Roll into a log, seal edges and cut into sections to form the rolls.
8) After cutting the rolls, place them in a baking dish (greased or with baking paper) and let rise for another hour.
9) Bake for 25-30 minutes or until golden-brown.

Optional: you can easily make frosting for the rolls by mixing 150g of powdered sugar with 2 tbsp. of plant milk and vanilla extract. Finally, pour that mixture over the rolls while they are still warm